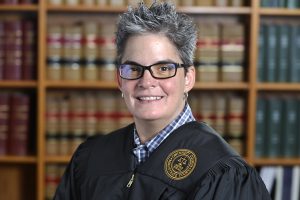 Atlanta’s John Marshall Law School (AJMLS) congratulates 1996 alumna, Angela Duncan, on her recent appointment as the 11th Superior Court Judge for Gwinnett County. Gwinnett County is Georgia’s second largest county and this position was created by Governor Brian Kemp to assist in the increasing caseload. It is speculated that Duncan will be Gwinnett’s first openly gay Superior Court judge as she joins a handful of other officials who are members of the LGBTQ community and hold high profile positions in the county.

Judge Duncan has worked as a Gwinnett County Magistrate Court judge for the past 15 years and is the current chief judge for the city of Chamblee’s municipal court. She earned her bachelor’s degree in criminal justice from North Georgia College and served in the U.S. Army Reserves from 1987 to 1995.

Duncan attended AJMLS part-time attending both day and night classes while also maintaining a full time job. Throughout her study, she sought to experience different areas of law by working at a different firm each year of law school. She learned every aspect of private firms, from working in the file room to becoming a law librarian assistant and court runner. She also experienced many different law practices prior to graduation, from labor law and appellate work to personal injury and criminal defense.

It was during her third year of study, and work at the former Gambrell and Stolz, that her interest was piqued in serving on the bench. Irwin W. Stolz, Jr., who served on the Georgia Court of Appeals from 1972-1977, was an excellent mentor and teacher during her employment at the firm.

When asked if she had advice for the Atlanta’s John Marshall community, she noted:

“Whatever it is you want to do, find a passion in it- it’s a lot less like work.”

“I have always been open about who I am. My wife and children have accompanied me and are a huge part of my success.”

Atlanta’s John Marshall Law School is pleased to celebrate this appointment and wishes Judge Duncan much success as she takes the bench in the New Year.