Atlanta’s John Marshall Law School (AJMLS) congratulates the Corporate and Business Law Society’s Negotiations team for winning the ABA’s Regional Negotiation Competition this past weekend. The competition was held in New Orleans at Tulane University and the AJMLS team consisted of Ashley Winston, James Elliott, and Ashley Lewis (alternate). A total of 25 teams participated in the regional competition.

Notably, the Atlanta’s John Marshall team earned a perfect score from one of the judges during the final round. Having secured the regional win, the team will now compete in the national competition in Chicago this upcoming February.

We are incredibly proud of our students and wish them the best of luck in Chicago! 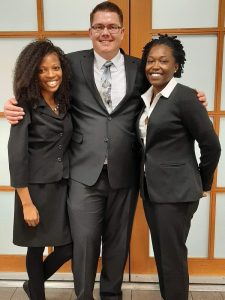 The team would like to thank the following people:

About the Negotiation Competition

The ABA Law Student Division Negotiation Competition provides a means for law students to practice and improve their negotiating skills. The competition simulates legal negotiations in which law students, acting as lawyers, negotiate a series of legal problems. The simulations consist of a common set of facts known by all participants and confidential information known only to the participants representing a particular side. All of the simulations deal with the same general topic, but the negotiation situation varies with each round and level of the competition.