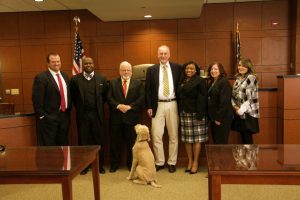 Atlanta’s John Marshall Law School (AJMLS) congratulates Vincent A. Lotti, Class of 2010, for his recent appointment as a Henry County magistrate judge. At the Law School, Lotti served as both a Peer Mentor and a Student Ambassador, and was a three time Dean’s Award recipient.

Judge Lotti is a lifelong resident of Henry County, graduated from Union County High School, and earned his Bachelor of Arts in Political Science and Government from The University of Georgia. After graduating from Atlanta’s John Marshall Law School, Lotti entered private practice and founded his own practice representing clients in both civil and criminal cases.*

The Law School is incredibly proud of Judge Lotti’s drive and service to the community and we look forward to celebrating his continued success.