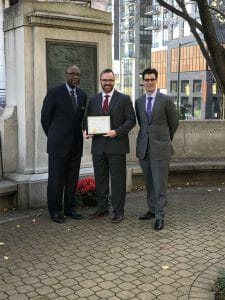 My swearing-in at Pershing Point was so much more than a ceremonial formality or personal celebration for passing the bar. I chose the Park’s World War I monument as the location because I researched its complicated racial history while in law school. The monument contains a memorial ledger of soldiers killed in WWI from Fulton County. The list segregates its black soldiers by listing them at the bottom right corner of the memorial ledger underneath an inscription etched in stone: “NEGROES.” The monument lay neglected for nearly 100 years until 2014 when a young associate attorney at Jones Day, J.P. Boulee, and now a U.S. District Court Judge Nominee, led a firm wide effort to revitalize the monument and park. Also present was Richard (Rick) Deane, former U.S. Attorney and managing partner at Jones Day, who devoted a substantial effort to ensure the park was maintained and preserved in the future. I had the chance to interview Rick while researching my article. Both he and Judge Boulee were instrumental in my understanding of the monument and how they approached its complicated history when they sought to clean up Pershing Point. I expand on this understanding in my article and also present the black soldiers’ military service history following its trail throughout their time in Europe. It also suggests a judicial framework for approaching cases involving the removal of veterans monuments from public land.
To me, my swearing-in celebrated the intersection of our shared histories spanning 100 years from a time when society was nearly destroyed by racial animus to now, when a few Veteran lawyers from diverse backgrounds could finally be the voice for those who were segregated even in death and possibly reconcile a new understanding of how far we’ve come from then to now. As a Veteran, I couldn’t think of a more appropriate way to pledge my oath as an attorney than to do so while standing next to my fallen brothers and raising my right hand like we all did as soldiers.

Mr. Black, who served as Editor-in-Chief of Volume 11 of the John Marshall Law Journal, researched and published an article on the history and interpretations of the imposing monument erected in that Park in 1920 by the War Mothers of Fulton County. See William J. Black, A Higher Loyalty To Their Ultimate Sacrifice: Segregated Black War Casualties And Society’s Monumental Mistake, 11 John Marshall Law Journal 34 (2018).

During his tenure as Editor-in-Chief of the Law Journal, Black led the effort that produced the well-received and highly successful 2017 Symposium & CLE Event on Veterans’ Issues and the Law. Judge Boulee was one of the featured speakers at that event, where he discussed the concept of accountability courts for veterans as an alternative to traditional adjudication.

Mr. Black is now working as a cybersecurity software engineer at Equifax and pursuing a Master of Laws in Securities and Financial Regulation at Georgetown University Law Center. He also volunteers as a Special Assistant District Attorney in Cobb County under the supervision of Deputy Chief Assistant District Attorney Mike Carlson, primarily on gang related criminal appeals.

He is hoping to explore an attorney career in cybersecurity, government investigations and special matters, and working directly with corporate or government clients advising their application development teams, data protection officers, and cybersecurity engineers on IT Security Risks, databreach management, regulatory responses, and deploying secure development practices that comport with federal, state, and international cybersecurity laws.

The Law School is incredibly proud of Billy’s research and service, and we look forward to celebrating his continued success.