AJMLS is pleased to announce that both teams made a great showing at the SRBLSA Convention and represented the Law School admirably. Wilkerson was commended by multiple judges for being “unshakable” and for her ability to command their attention. Shakhan was told he ‘belonged in a courtroom’ by the National Moot Court Advisor and received positive feedback for his ability to handle difficult questions from the bench with ease.

After defeating teams from Emory University, the University of Alabama, and the University of North Carolina, Foster and Stewart placed first in the competition. They impressed the judges with their superior oral and written advocacy skills and their thoughtful responses to difficult questions. They will advance to participate in the National Competition scheduled to take place in Brooklyn, New York.

Please congratulate all of our competitors for their outstanding performance! Please also wish the members of the team luck as they prepare for the national competition. 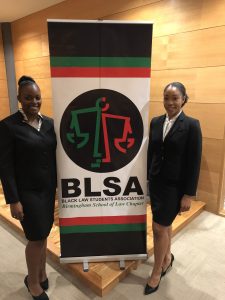