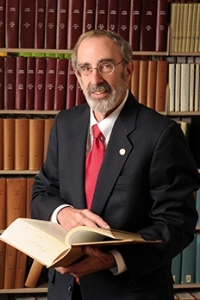 Dean Emeritus and Professor of Law

Malcolm L. Morris served as Dean and Professor of Law at Atlanta’s John Marshall Law School from July 2014 to January 2020.

The road to Dean at Atlanta’s John Marshall Law School was paved with impressive leadership positions, research, and service to legal education and the legal community. As one of the most prominent legal scholars in notary law, Dean Morris was the inaugural recipient of the Lifetime Achievement Award from the National Notary Association. Dean Morris was the Director of Graduate Estate Planning Programs and the Associate Director of Graduate Tax Law Programs. He also served two terms as the Associate Dean and one term as the Interim Dean at Northern Illinois University College of Law. During his tenure there, he was elected Secretary of the Faculty Senate and was a member of the Strategic Planning Committee and the University Council, as well as the University Personnel Advisor. Additionally, he has been active as an ABA accreditation site visitor, Board Member and Treasurer of CLEO, Inc., LSAC trustee, and member of various AALS and ABA committees. During his time in Illinois, Dean Morris chaired and participated on numerous Illinois State Bar Association committees, received a number of awards for those efforts, including the prestigious Austin Fleming Award, all of which led to his induction as a Laureate in its Academy of Illinois Lawyers. He also has an extensive scholarship record that includes works published in both law reviews and practitioner-oriented publications.