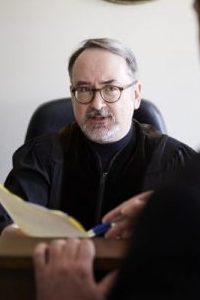 Professor Van Detta entered the legal field after numerous academic achievements and honors. He was elected to Phi Beta Kappa at Union College of Union University, and during law school, he was elected Editor-In-Chief of Volume 51 of the Albany Law Review at Albany Law School of Union University. In law school, he was the inaugural Dean Ralph G. Semerad Memorial Scholar as well as a Van Horne Scholar; elected to the Justinian Academic Honor Society; selected by the faculty to receive the Scribes Award for the most outstanding and analytical student article published in Volume 50 of the Albany Law Review; and awarded the Cardozo Prize for his leadership and editorial work on the Law Review.

After law school, Professor Van Detta first served as Law Clerk to Judge Roger J. Miner of the U.S. Court of Appeals for the Second Circuit before entering private practice. He practiced for 12 years at the international law firm of Kilpatrick Stockton LLP in Atlanta where he was elected to the partnership and concentrated his practice in the areas of domestic and trans-national employment discrimination law, domestic and European labor law, and international business issues, representing major international corporations.

Professor Van Detta then followed his father’s footsteps into academia, and joined the John Marshall faculty in August 1999. He was tenured and promoted to the rank of full Professor of Law in 2005. He served as Associate Dean for Academic Affairs in 2002 and in 2004.

In 2006, Professor Van Detta received the Robert J. D’Agostino Teaching Excellence Award from the students of John Marshall Law School, and he was named John Marshall’s 2006 Association of American Law Schools Teacher of the Year.

In 2013, Merkourios, Utrecht Journal of International and European Law, appointed Professor Van Detta as a member of the inaugural Permanent Board of Referees, based on his expertise and scholarly publications in the areas of Trans-National Commercial Law, International Business Transactions, International Civil Litigation, Private International Law, Employment and Labour Law, and Jurisprudence. Professor Van Detta teaches courses encompassing those areas in AJMLS’s J.D. Program, American Legal Studies LL.M. Program, and Employment Law LL.M. Program. He also has taught and continues to pursue scholarship in the areas of Civil Procedure and Torts.

In recognition of his distinguished service to the law school, his excellence as a teacher, and the breadth and depth of his scholarship, the Board of Directors has conferred upon Professor Van Detta a named Chair in Law: The John E. Ryan Professor Of International Business & Workplace Law.

I. Articles Published To Date

“For The Love Of God!  Open This Door!”:  Individual Rights Versus Public Safety Under The “Direct Threat” Standard Of The Americans With Disabilities Act After Three Decades Of Litigation, 6 Belmont L. Rev. 149 (2019)(Symposium Issue:  “The Modern Workplace: Contemporary Legal Issues in Employment & Labor Law”)

The Law School Of The Future:  How The Synergies Of Convergence Will Transform The Very Notion Of “Law Schools” During The 21st Century From “Places” To “Platforms”, published concurrently in 37 LaVerne L. Rev. 103 (Fall 2015) and by the Union of Turkish Bar Associations and the Bahçeşehir Üniversitesi L.J. (2015)(Symposium:  Legal Education In The 21st Century, Istanbul & Ankara, Turkey, May 2014)

A Bridge To The Practicing Bar Of Foreign Nations—Online American Legal Studies Programs As Forums For The Rule Of Law And Pipelines To Bar-Qualifying LL.M. Programs In The U.S, 10 South Carolina  J.  Int’l  L. & Bus 63 (Fall 2013)

The Decline And Fall Of The American Judicial Opinion, Part II:  Back To The Future From The Roberts Court To Learned Hand–Segmentation, Audience, And The Opportunity Of Justice Sotomayor, 13 Barry L. Rev. 29 (2010)

The Decline And Fall Of The American Judicial Opinion, Part I:  Back To The Future From The Roberts Court To Learned Hand–Context And Congruence, 12 Barry L. Rev. 53 (2009)

Lawyers as Investigators: How Ellerth and Faragher Will Spotlight a Modern Crisis of Ethics, Professionalism, And Profits Through Trial Counsel Disqualification And Waivers of Privilege In Workplace Harassment Cases, 24 J. Legal Prof. 261 (Spring 2000)
Cited in  Fognani v. Young, 115 P.3d 1268 Colo. 2005)(en banc); Ellis B. Murov, The Practitioner’s Guide To The Defense Of EPL Claims, 105 n.34 (Am. Bar Ass’n 2005)

Author and Contributing Editor, with Professor Helen de Haven, How To Take A Case Before The NLRB, Chapter 14 (ABA 8th ed. 2007)

Co-author with Professor Lynn-Rhys Jones and Contributing Editor, Cumulative Supplement to How To Take A Case Before The NLRB, Chapter 14 (ABA 2002 and 2003)

Permanent Board of Referees 2013-2014, Utrecht Journal of International and European Law, University of Utrecht, Netherlands (formerly known as Merkourios) (2013-2016)

Presenter, Update On Developments In The Alien Tort Statute After Kiobel v. Royal Dutch Petroleum:  Is There Any Role Left For The ATS?, AJMLS International Law Soc’y, 25 March 2015 (Atlanta, GA)

Featured Speaker, Equal Pay for Equal Work:  The Struggle For Equal Pay, From Days of the War Labor Board to the Equal Pay Act, Title VII, The Lilly Ledbetter Fair Pay Act of 2009 and President Obama’s Executive Orders of Summer 2014, presented as part of the “Controversies of Cultures Lecture Series” sponsored by the Center for Diversity and Inclusion, the Political Science Department, the Human Resources Department, and the Pre-Law Society at West Georgia State University, Carrollton, GA, Tuesday, 30 September 2014, Ingraham Library.

Presenter, International Legal Education In The 21st Century, Conference hosted by Bahçesehir Üniversitesi, AJMLS, and the Turkish Bar Association in Istanbul and Ankara, Turkey, May 5, 6, & & 7, 2014.  My presentations were based on two of my recently published articles:

A Bridge To The Practicing Bar Of Foreign Nations-Online American Legal Studies Programs As Forums For The Rule Of Law And Pipelines To Bar-Qualifying LL.M. Programs In The U.S, 10 South Carolina J. Int’l L. & Bus. 63 (Fall 2013); and

Panel Moderator, “Build It and They Will Come: The Realized Prophecy of Strickland v. Washington–Discussing the Collusive Use of Ineffective Assistance of Counsel and Available Remedies Through the Georgia Legislature” at The John Marshall Law Journal— Dean Robert J. D’Agostino 2014 Symposium, The Legal, Ethical, and Practical Issues Facing Georgia’s Criminal Justice System, State Bar of Georgia Headquarters, Atlanta, Georgia,(March 4, 2014).

Presenter, The Alien Tort Statute and the U.S. Supreme Court: What’s the ATS and Why Should We Care What the Supreme Court Has Done With It In Kiobel v. Royal Dutch Petroleum? (20th Annual Supreme Court Update, Institute of Continuing Legal Education in Georgia, 24 October 2013)

Presenter, The Alien Tort Statute and the U.S. Supreme Court: What’s the ATS and Why Should We Care What the Supreme Court Has Done With It In Kiobel v. Royal Dutch Petroleum? (Atlanta’s John Marshall Law School Faculty Lecture Series, 26 April 2013)

Presenter, “International Civil Litigation in U.S. Courts,” Program For Delegation Of Judges From The Republic of Georgia (Atlanta, 18 October 2012) (sponsored by U.S. Department of State)

The John Marshall Law Journal— Dean Robert J. D’Agostino 2011 Symposium, In The Best Interest Of’:  A Look At Family Law In Georgia, at State Bar of Georgia Headquarters.

Moderator, “Windows On The World:  Opportunities For JMLS Students For Study Abroad,” JMLS, Nov. 2004, sponsored by the International Law Society

Professor Van Detta has been a member of the State Bar of Georgia’s Formal Advisory Opinion Board since 2005.

Additionally, Professor Van Detta has previously served on the Board of Atlanta Theatre-To-Go and the Southeastern Regional Board of the American Foundation for the Blind. He has also been a member of the Society for the Promotion of Roman Studies and the Association of Lunar & Planetary Observers. Having worked in the Union College Schaffer Library during his college years, Professor Van Detta believes strongly in the role of college and public libraries in our communities, and he and his son have volunteered at the Smyrna Public Library.

Professor Van Detta is an active ambassador for the conservation of wildlife in our backyards and neighborhoods. He lectures on backyard bird-feeding and the history of feeding birds in America. He also curates the songbird habitat that he and his wife have established at their home. They have been especially successful in facilitating nesting by the Eastern Bluebird and the Brown-Headed Nuthatch.

Professor Van Detta is a congregant of All Saints’ Episcopal Church in Atlanta. He notes that the most challenging teaching assignment he’s ever had was teaching Sunday School to 3rd and 4th graders.