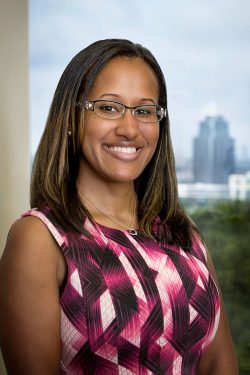 Denienne Steele was born in Jamaica and raised in Queens, New York. She moved to Atlanta, Georgia in 2002 to attend Spelman College. While at Spelman College, Ms. Steele majored in Political Science and graduated in 2006. After attending Spelman College, she attended Georgia State University College of Law and received her Juris Doctorate Degree in 2010. She was sworn into the State Bar of Georgia in November 2010. Immediately after law school she worked as an Admissions Counselor for Georgia State University College of Law. Ms. Steele later opened her own practice handling real estate matters. She is a registered neutral in the State of Georgia for civic and domestic matters and has served on as an Arbitrator for the Georgia Office of the Attorney General New Motor Vehicle Arbitration Panel. Since 2015, Ms. Steele has been an Assistant Solicitor-General in DeKalb County working in the Diversion Unit. Her current duties in the unit include overseeing Misdemeanor Diversion, Phoenix, & the GOALS Court Programs. She also is the prosecutor for the Misdemeanor Mental Health Court. In her spare time Ms. Steele serves on the executive board for the Greater Atlanta Black Prosecutors Association, is a member of Junior League Dekalb, and serves as a mentor and steering committee member for the Spelman College’s Sister2Sister Program.